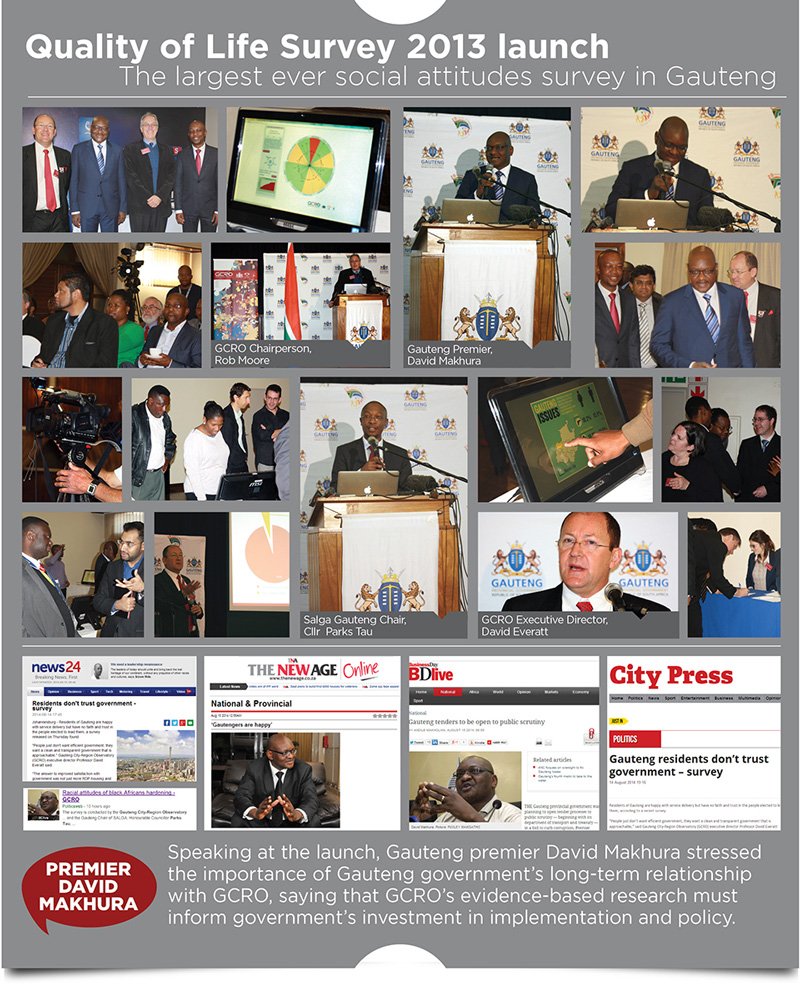 The bi-annual Quality of Life (QoL) survey measures the quality of life, socio-economic circumstances, attitudes to service delivery, psycho-social attitudes, value-base and other characteristics of the GCR. The first QoL survey, with 6636 respondents in Gauteng and the economic hotspots in the broader GCR, was commissioned in 2009. A second QoL survey was completed in 2011, this time with 16 729 sample points across Gauteng. The third QoL survey was a watershed moment in the series by representing a provincial/local sphere partnership and providing data to ward level, something we’ve been aiming for since inception. It was also the first survey to have a massive sample of over 27000 respondents, which probably ranked it as the first social attitudes survey of its size undertaken in Gauteng.

As GCRO approached the third Quality of Life survey, we knew it would be critical – not least because three points in time (though still a small number) allows us to do ‘futurology’ – i.e it allowed the GCRO to undertake trend analysis, impossible when we only had the first two surveys done. While official data is more reliable on many demographic issues, no-one was able to model future attitudes – to race and non-racialism, for example, or gender-based violence, or xenophobia. GCRO was be able to talk with some confidence about ‘where we were going’ as a city-region – not just the economy, or structures of government, but as citizens, as people who engage or disengage from politics and society, and those drawn into the mainstream or pushed to the margins.

The ability to map and model that, into the future, and lay those over government’s future plans – whether for transport or housing or economic nodes and so on – was critical in uniting the two often separate elements, namely abstract policy intentions and the ‘warm bodies’, the people who have to make those policies work, on the ground.

The pressure had been on for some time, for the GCRO to find a way of attaining ward-level representative data within our existing budget constraints. This survey allowed the GCRO not merely to analyse by municipality (or very large wards) but to pin-point – across all wards – where challenges, social problems, psycho-social attitudes and so on cluster, and thus permit local, provincial and national spheres of government to target their programmes with greater accuracy.

For the GCRO, it is deeply satisfying that the three municipalities – Ekurhuleni, Johannesburg and Tshwane – approached us with additional funds that permitted us to both realise a ward-representative sample and to forge a robust working partnership across the spheres that comprise the Gauteng City-Region. By mid-2014, ward- level data for all municipalities in Gauteng was available, a major advance for us all.

After a highly competitive tender process, GeoSpace won the tender to undertake the fieldwork, with every ward in Gauteng represented at a level that can be statistically analysed. The questionnaire was again improved, though all the indicator questions remained unchanged. The sample – with the advice and assistance of Emeritus Professor Paul Fatti as well as StatsSA’s Ross Jennings – worked from Small Area Layer (SAL) up to ward and then to municipality. In this way, by sampling from SAL, we generated better ward coverage than the traditional approach where random numbers assign starting points, and a ward may be represented by, say, only an informal settlement and a township, or only a hostel – the SAL level seeks to ensure that respondents are drawn from all the different settlement types within each ward (where possible). To ensure representivity, randomness was built into every layer, from the selection of SALs through to selection of stands, households and respondents.

However, GeoSpace faced the challenges that all field agencies do – over-zealous guardians of what should be accessible space – gated communities, mine hostels, suburbs with armed response, and the like. In case after case, despite all our assurances that this survey presents Gautengers with a unique opportunity to have their say, knowing that our elected officials will hear them, fieldworkers were threatened, turned away and refused access. This is a terrible situation, given both the constitutional guarantee of freedom of movement and speech; but also given the fact that every respondents and/or community who refuses to answer the questionnaire has a negative impact on quality.

Despite these access obstacles, all 508 wards in Gauteng were surveyed. A separate company was hired to undertake back-checking to ensure quality, and the back-check teams were in field throughout the fieldwork process. Quality control was provided by Ross Jennings from Statistics South Africa and Professor Emeritus Paul Fatti (University of the Witwatersrand), with weighting required by both ward and race/sex (at ward level). The final cleaned dataset of 27 490 respondents, had an error bar of 0,6%.

1) All Quality of Life survey data is freely available under the CC BY-SA 4.0 license. Data can be downloaded from the DataFirst service at UCT, or requested from the GCRO.

2) The 2013 QoL survey is also accessible via the GCRO QoL Survey Viewer (together with data from QoL surveys conducted in other years). Most of the variables are selectable, with an option to crosstab by local municipal boundaries or a few other demographic variables. The results are presented as tables and/or graphs and may be printed or downloaded.

3) Alternatively, an overview of the results from the launch can be seen in the powerpoint presentation and overview press release, downloadable below.

4) A comprehensive report that benchmarks municipalities in Gauteng against one another across 13 areas of focus, and provides summary overviews for each metropolitan municipality and district in the province.

5) A range of maps of the month (starting from August 2014) and vignettes highlighting specific aspects of the QoL survey results.

Other Quality of Life Surveys