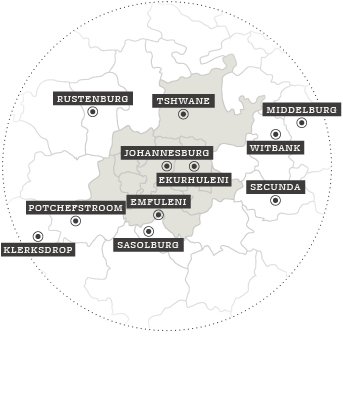 The Gauteng City-Region is an integrated cluster of cities, towns and urban nodes that together make up the economic heartland of South Africa.

The core of the city-region is Gauteng, South Africa’s smallest but most densely populated province. Gauteng includes the cities of Johannesburg, once the world’s most important centre of gold production and today South Africa’s financial capital, and Pretoria, the country’s administrative capital. It also includes commercial, industrial and mining centres such as Germiston, Springs, Alberton, Boksburg, Benoni, Vereeniging, Vanderbijlpark, Krugersdorp, Randfontein and Westonaria.

Beyond the boundaries of the Gauteng province is a wider urban region of smaller centres and population concentrations.

To the north-west is the town of Rustenburg, a global centre of platinum mining. As the demand for platinum has increased over the last decade, mining activities have expanded, and the town’s growth has accelerated.

To the south, just across the Gauteng border, is Sasolburg, a town centred on the production of oil from coal. To the south-west is a patchwork of towns historically anchored on gold-mining, among them Potchefstroom and Klerksdorp. These centres have seen limited population growth over the last decades as their gold-mining economies have stagnated.

To the east are a number of small to medium sized towns, notably Witbank, Middleburg and Secunda, anchored respectively on coal mining, iron and steel production and energy generation.

To the north east is a swathe of semi-urban settlements – a zone of displaced urbanisation – housing people once barred by apartheid from setting up home in South Africa’s whites-only urban centre. This area of over half a million people has little economy of its own. It is functionally connected to the Gauteng economy by subsidised bus transport routes that have historically ferried thousands of workers into central Pretoria on a long-distance daily commute. 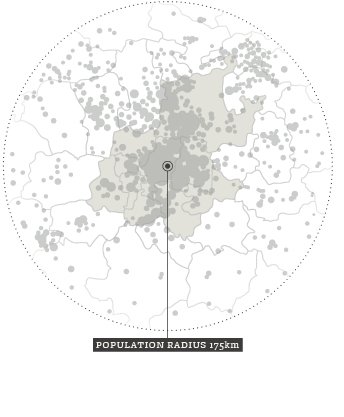 There are a number of different ways to represent the population of the broader Gauteng City-Region. One way is through an estimation of the number of people living within a reasonable driving distance of its geographic and symbolic centre. The figure left shows the spatial distribution of people across the broader city-region using 2011 census data. In 2011, 13,4 million people were living within the radius of 100 km from the Johannesburg city centre, the region's core urban node (it was 10,2 million in 2001). 16,8 million lived within the wider radius of 175 km (it was 13,0 million in 2001).

The Gauteng City-Region contributes a significant proportion of South Africa’s economic output, with its different areas, focused variously on mining, manufacturing, financial and business services, innovation or trade, working together to constitute a functionally integrated urban economy and single labour market. This region is the country’s centre of trade with Southern Africa and beyond. In 2013 Gauteng produced 33,8% of the national GDP in current prices (Source: StatsSA GDP-R). The broader Gauteng City-Region is estimated to have contributed about 45% of South Africa’s total economic output.

Its relative economic weight in the country and the subcontinent means that the Gauteng City-Region has advantages over other parts of the country. There is a widespread perception that better work and education opportunities are available here. In comparative perspective, Gauteng seems to offer higher levels of access to good housing and essential household infrastructures, greater proximity to urban amenities, and generally better standards of living. As such it is a growing pole of attraction for migrants from South Africa’s rural areas and other urban centres, as well as immigrants from elsewhere in the continent. The entrance of newcomers gives it an increasingly cosmopolitan character and vibrant social and economic life. This in turn adds continuously to its dynamism, and attractiveness to opportunity seekers.

Despite its importance, the Gauteng City-Region faces many challenges. These include high levels of poverty, unemployment and social exclusion. South Africa is one of the most unequal societies in the world, and this stark reality is particularly evident in Gauteng cities and towns. There remain spatial concentrations of huge wealth alongside large informal settlements. And although there is gradual integration the concentration of different population groups in specific areas previously designated for them by apartheid remains to this day.

While the Gauteng City-Region has a diverse and fast growing economy, the labour market is not yet dynamic enough to accommodate the aspirations of all prospective workers. Economic activity is still patterned by assumptions and interactions inherited from the apartheid era that often limit the opportunities for new market entrants, especially young work-seekers. The result is a quality of life for some that matches, and often exceeds, that enjoyed by residents of developed world cities, but high levels of frustration and marginalisation for many others. In turn, dynamism and cosmopolitanism have flipsides in simmering resentment of those who have succeeded, and antipathy to newcomers, especially foreign migrants.

Key to building on its potential and meeting its challenges is how the Gauteng City-Region is governed. At the local level, the urban region within Gauteng is governed by three metropolitan municipalities and, outside of these, a number of two-tier local government structures comprising both district and local municipalities. The local sphere carries some functional areas of responsibility; the provincial sphere, represented by the Gauteng Provincial Government, carries others. Outside the boundaries of Gauteng, other municipalities and other provincial governments are responsible for the emergent cities and smaller towns making up the wider urban region. Various national departments, and large state-owned entities and parastatals also play a role, particularly in the areas of water and power provision, and freight and air transport.

It is appropriate that government responsibilities are distributed in this way: the city-region is so large, complex and dynamic that no one government authority could possibly encompass the whole. But to address the region’s challenges and ensure that it reaches its full potential, the different parts of government must work together. Improved intergovernmental co-operation, and greater collaboration between government, business and civil society, so that the cities and towns stretching across and beyond the boundaries of the Gauteng province can be made to work better as a more integrated, productive and sustainable whole, is at the heart of the idea of a Gauteng City-Region.