< Back to Map of the month

In June 1991, three decades ago, the South African parliament passed the Abolition of Racially Based Land Measures Act, 1991. In doing so, it repealed key pieces of legislation enacted by white minority governments to restrict black ownership of land and to drive segregation, including the 1913 Land Act and the 1966 Group Areas Act (Letsoalo and Thupana 2013).

Some of GCRO’s previous maps have showed the extent to which former white, Indian and coloured areas are now racially mixed (GCRO 2010, Katumba 2019), and the way in which townships, human settlements and informal settlements display high levels of language diversity even though they are racially homogenous (Hamann and Ballard 2017). Before democracy, white minority governments reinforced the idea that people belonged to different races and that differently raced people should not be neighbours. In the democratic era, racial classifications retain a great deal of currency (Maré 2014), but the sharing of space across these classifications is an unremarkable feature of our urban experience.

Notwithstanding this wholesale transition, socio-economic segregation remains relatively high. People of different occupation categories tend to live in different neighbourhoods (Hamann and Ballard 2021). The average incomes for many poor township wards and rich suburban wards are diverging rather than converging (Hamann and Cheruiyot 2017). As our map of the month shows there is a distinct property value gradient. Given that the city region’s income inequality remains among the highest in the world, areas that were once racially exclusive are today financially exclusive and still do not constitute a viable residential choice for the working class majority. 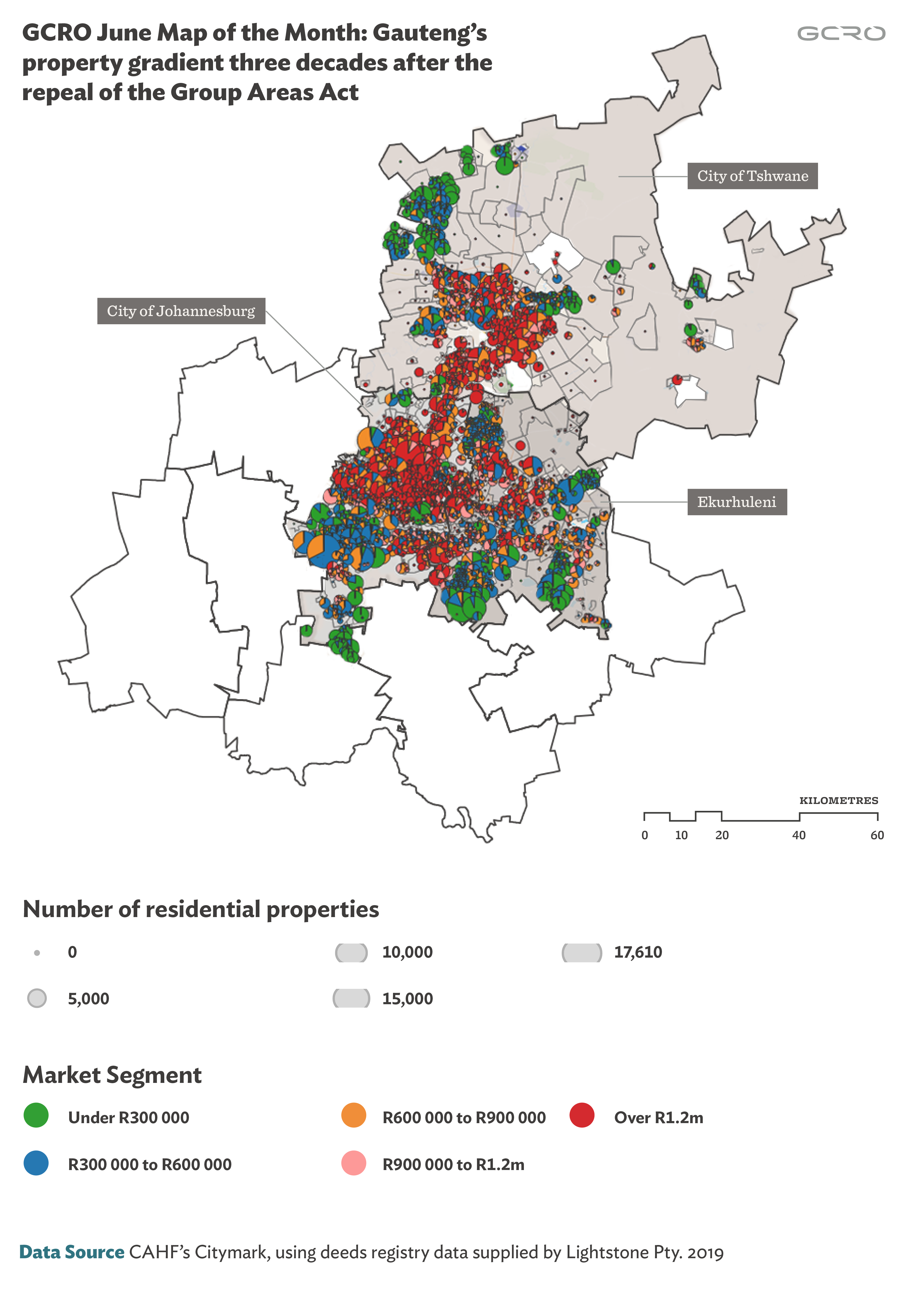 This month’s map is produced by the Centre for Affordable Housing Finance in Africa as part of its ongoing analysis of formal residential property markets in South Africa’s metros. Each pie chart corresponds to a suburb. The size of the pie chart reflects the quantity of residential properties in that suburb for 2019 (and previous years back to 2008 if you use the slider on the interactive map). It shows that large proportions of residential properties in parts of Soshanguve, Mamelodi, Katlehong, Tsakane, Orange farm, and some inner city areas, are valued less than R300 000. (What is not reflected here is houses delivered through government housing programmes where the title deed has not yet been issued—this title deed backlog is absent from the Deeds Registry). High proportions of properties in parts of Mabopane, Tembisa, and Soweto, are between R300 000 and R600 000. Meanwhile many of Johannesburg’s more affluent northern, western and suburbs, Kempton Park, Centurion, and Tshwane’s Eastern suburbs have large proportions of residential properties of more than R600 000.

The pie charts do show at a high degree of granularity that particular areas have a mix of market segments. Parts of Soweto, notably Protea Glen, have significant orange slices - properties between R600 000 and R900 000. Across Midrand, Centurion and Pretoria East, we see more mixed neighborhoods with a variety of market segments. Expensive suburbs, meanwhile, are almost uniformly high-value, showing only small numbers of properties valued below R1.2 million.