< Back to Map of the month

This Map of the Month highlights multiple forms of connection across the northern Gauteng City–Region (GCR) by combining different datasets of commuting trips and mining operations into one map. Three specific forms of connection are showcased, namely the connections between Gauteng and Rustenburg mining operations, commutes to and from northern Tshwane, and former KwaNdebele commuter journeys. These connections are drawn as straight lines from the start to end points, representing some of the city region’s flows of goods, services, and people (particularly workers) (Figure 1). Although the forms of exchange being mapped are different, they all demonstrate the complex web of social and economic relations that shape the GCR landscape. The Map illustrates some of the ways through which the core areas of the GCR are interconnected with their peripheries, including those that are outside the Gauteng Province, within its commuting distance.

Figure 1: Economic and commuting connections in the northern GCR.

Mining is the lifeblood of Rustenburg. Although Rustenburg is a city in its own right these mining operations are strongly linked to Gauteng (Mosiane, et al., forthcoming). The green lines in Figure 1 represent the transportation of mining products and supplies between Gauteng and Rustenburg mining operations. The items being transported include steel plates, grouting cement, consumable drilling steels and bits, and commercial explosives (Rustenburg mining company official, pers. comm., 2019). They also comprise spray paints, mine safety equipment, chemicals, once-off consumable spares, shaft cages, cage ropes, ventilation pipes, cleaning equipment, hostel food, drinking water, bulk stationary and accessories (ibid). The green lines in Figure 1 also symbolise the transfer of some platinum ore to Gauteng-based refineries as well as the transporting of platinum bars to Gauteng for international export. Notwithstanding their local offices in Rustenburg, the National Department of Mineral Resources and regional headquarters of mining companies are located in Gauteng, where leading financial facilities, specialized services, investors, and top-level management coordinate many of the mining operation logistics.

As regards to the mobility of people, the blue lines in Figure 1 represent travels through the Mabopane Station. The Gauteng City-Region Observatory (GCRO) mapped the daily commutes in 2018, pointing to Mabopane Station as a major point of origin, transfer, and destination for its 70 000 users (Mosiane, Sibisi, and Katumba, 2018; Demacon, 2012). In 2004, an estimated 228 000 people commuted daily from northern Tshwane crossing the Magaliesberg mountains southwards for work, education, and sustaining livelihoods (City of Tshwane, 2012; Hattingh and Horn, 1991). Notably, mobility was integral to the formation of northern Tshwane’s displaced rural areas, the township of Soshanguve and those of the former Bophuthatswana (Mabopane, Garankuwa and Winterveld). Mabopane Station has the potential to become a nerve centre of an emergent local economy, which alongside the mechanised and skills-based Rosslyn industries, may be seen as replacing the now defunct labour-intensive industries of the past (Babelegi, Garankuwa, and Mabopane) (Mosiane, Sibisi, and Katumba, 2018).

Figure 1 also shows in shades of orange the daily commutes between Pretoria and former KwaNdebele. It is estimated that up to 50 000 passengers commute daily between Tshwane and the areas making up the former KwaNdebele homeland (NDT, 2014). This number includes commuters travelling via buses, minibus taxis and private motor vehicles. For many commuters, this 160 km round-trip can take up to seven hours, and cost them about a third of their incomes (Maharaj et. al., 2011). The Public Utility Transport Corporation (PUTCO) bus service operates 540 buses during peak hours between Tshwane and former KwaNdebele, and 66 buses in off-peak hours. In particular, the following routes and associated number of buses make up the map’s three different PUTCO lines in shades of orange: Rust De Winter-N1 (18 buses); R573 (343 buses); R568 road (220 buses), and Dennilton-R25 (9 buses). There are 53 PUTCO bus services that specifically either disburse or collect commuters at the key Belle Ombré bus station in the Asiatic Bazaar area of central Pretoria (shown in pink in Figure 1), which saw a major upgrade in 2017 (PUTCO senior official, pers. comm., 2019).

PUTCO’s continuing dominance of the former KwaNdebele transport routes has enabled it to maintain the same level of service before and after the change in the state subsidy model (see Mosiane and Götz, 2022 for more details). That said, many PUTCO buses are withheld from service in off-peak hours in part due to the bus company opening some space for local participation in the transport industry. Until about 2015, PUTCO used to deploy 18 additional buses to ferry workers on Sundays to Tshwane, returning them to the former KwaNdebele areas on Fridays. This service was ceded to the taxi industry, which in partnership with some traditional authorities, operates 50 buses. In this regard, the Mahamba bus company operates 11 buses, while the Gijima bus company runs 39 buses (pers. comm., senior PUTCO officials, 2019) .

Most commuters travel along the narrow regional road, the R573, more commonly known as the Moloto Road. The Moloto Road has also come to be dubbed the ‘road of death’ by the public, with about 20 road accidents reported per month between 2012 and 2014, 39% of which involved pedestrians (SANRAL official, pers. comm., 2016). The costs of the Moloto Road – time, income, injuries and even lives – are behind proposals for a massive development of this route, the so-called Moloto Development Corridor. The National Department of Transport is seeking to optimise the bus service design as part of the three-pronged approach to the Moloto Corridor proposal (Mosiane and Götz, 2022).

These three case-studies all stem from the social and economic dependencies on Gauteng’s core. Figure 2 indicates these relative financial dependencies through Gross Value Added in each case-study area. These numbers are based on the annual value generated by different sectors of the economy (agriculture, mining, manufacturing, finance, etc.) which can be extrapolated to represent the relative investments and job opportunities in each place. Therefore, there exists this wide network for the movement of people, goods and services along the region’s rail and road network to access jobs and services within the core.

The regional railway and road network (Figure 3) are crucial government development interventions. That said, ordinary people tend to turn those facilities into resources to cope with, rework, or even overcome their peripherality (Mosiane, 2022). Conceptually, the city region’s large-scale practices and spaces of mobility overcome the divide between the core and periphery, the city and country, as well as the urban and rural. 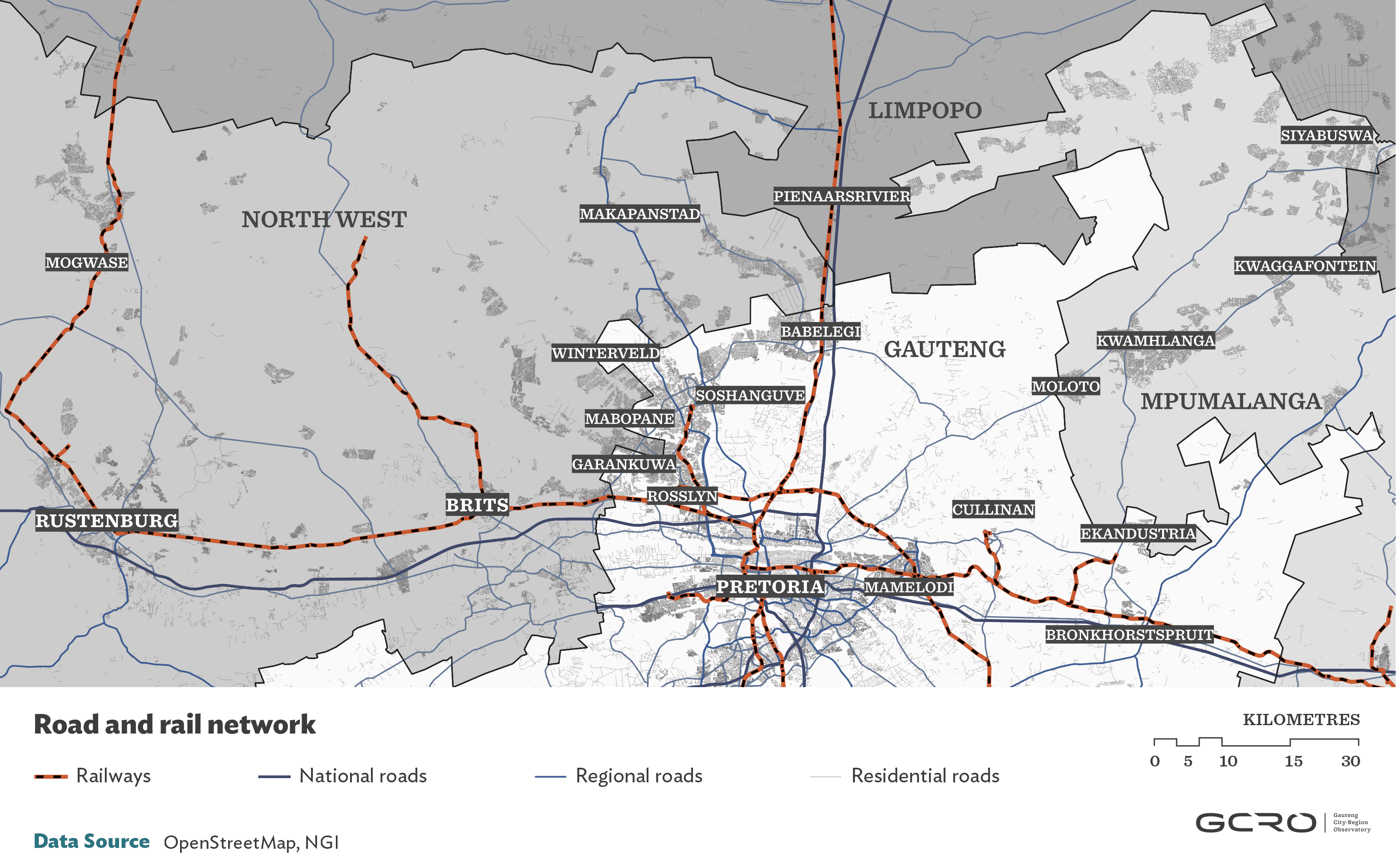 Figure 3: Road and Railway networks across the northern GCR.

Overall, this Map of the Month visualises transport connectivities for goods, services, and people as key aspects of the Gauteng City-Region socio-spatial and economic development. These flows signify different kinds of relationships of opportunity and dependency between the city region core areas (such as Central Pretoria) and those of its northern peripheries (specifically Rustenburg, northern Tshwane and former KwaNdebele), which in turn shapes the landscape and lives of its inhabitants.

Mosiane, N. and Murray, J. (2021). ‘Distribution of population vs economic activity across the GCR’, GCRO Map of the Month, Gauteng City-Region Observatory, August 2021.